Family growing faster than anticipated with 3 Energetic boys under 5.
In :-
A strong wee Ex Coal Miners "4 in a block " house in Eaglesham .
+
Bit of space out the back
?
Time to ...
​Build a Play Barn
​aka - a single Garden Room in the Sunlight.
Into which activity... in a Phototropic manner .....might just shift. 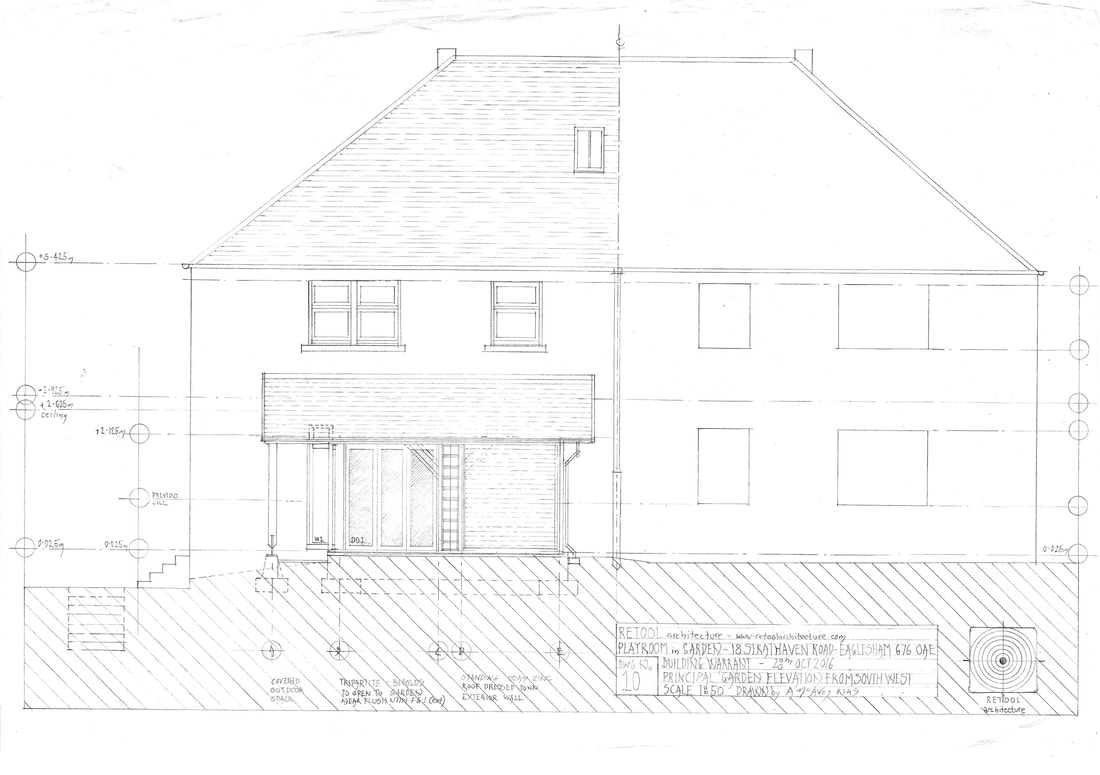 This House was just too wee.
After some revised landscaping and garden Boundary issues were sorted out, just enough space was created for a Play barn in the Garden connected sensibly to the House.
One existing window was taken down to Floor level to allow the house to flow south to the Barn.
​Several tons of Soil were taken to the Front garden for use in new  Planters.
​We designed a bespoke Carpentry Jointed Oak Frame Barn and link space to keep the height down beneath upper level windows.
Ground works including supporting dwarf walls were mainly self built by the owners.
​Carpentry Firm - Timber Design + Construction in Kirriemuir Built the Frame - Off Site and assembled it in 2018.
To welcome Carpenter Gaetan Goubet back to one of the McAvoy family building sites, we offered a suitably impossible and challenging connection point for the sitooterie overshoot Post .... which had to land on a Curious Glacial erratic stone unearthed in the excavations.
So
​A suitable Stainless steel Connecting shoe, for slotting to the external Oak Post of the sitooterie was fabricated by Blacksmith Graham Butler + attached to the erratic with almost mm exactness.
It now firmly earths and holds down the  structure on its south westerly Corner.

​3 months later the Play barn was wind and water tight and allowed for reorganisation of the whole House.
All Furniture went walkabout.
​
The 4 in a block original Building was over wrapped with external insulation and reroofed  via Common repair by East Renfrewshire council in 2020.
The Walker family are hardy and  now glad they can slide the Barn  open to the Garden , when the house is too warm .

What was originally thought to be just a Play barn for 3 boys under 7 -  Kyle Finlay + Arran ended up becoming the principal living room of the House, due to gradual appreciation of space , aspect and sunlight.
The Barn was completed in late 20 20 following a slow carefully process of self Build, including an Interior concept that took the Oak Flooring up the walls and ceiling.
​The final touch was a Lockdown Homeschooling area in the Link built from recycled Church Pews and an old tenement door.
Space in the Barn and at the work station .. well its Not so much fought over as booked out , a lot of the time.
Clad in Larch and Glazed extensively by Sammy at Pollokshaws Glazing - it bifolds open to the garden - an awful lot of the play time..

Robust , Crafted in wood , Toxin Free  + Cosy
​Its a little bit of the family home at " Mill O Braco " brought south from Aberdeenshire 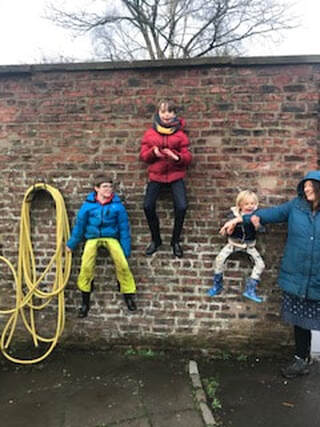 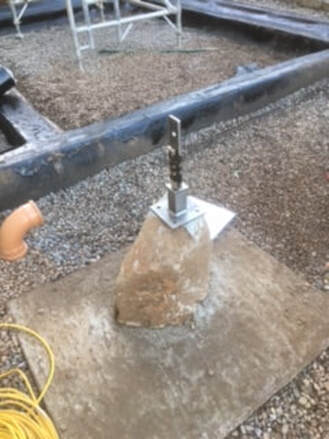 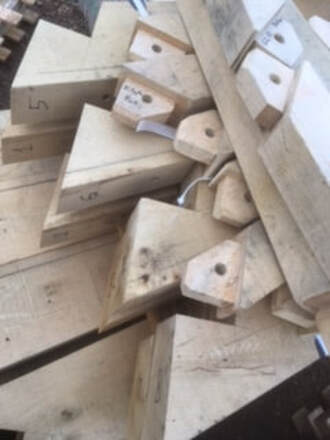 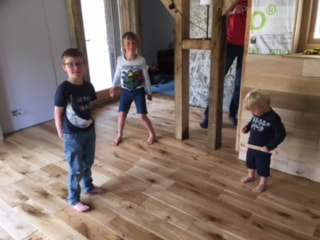 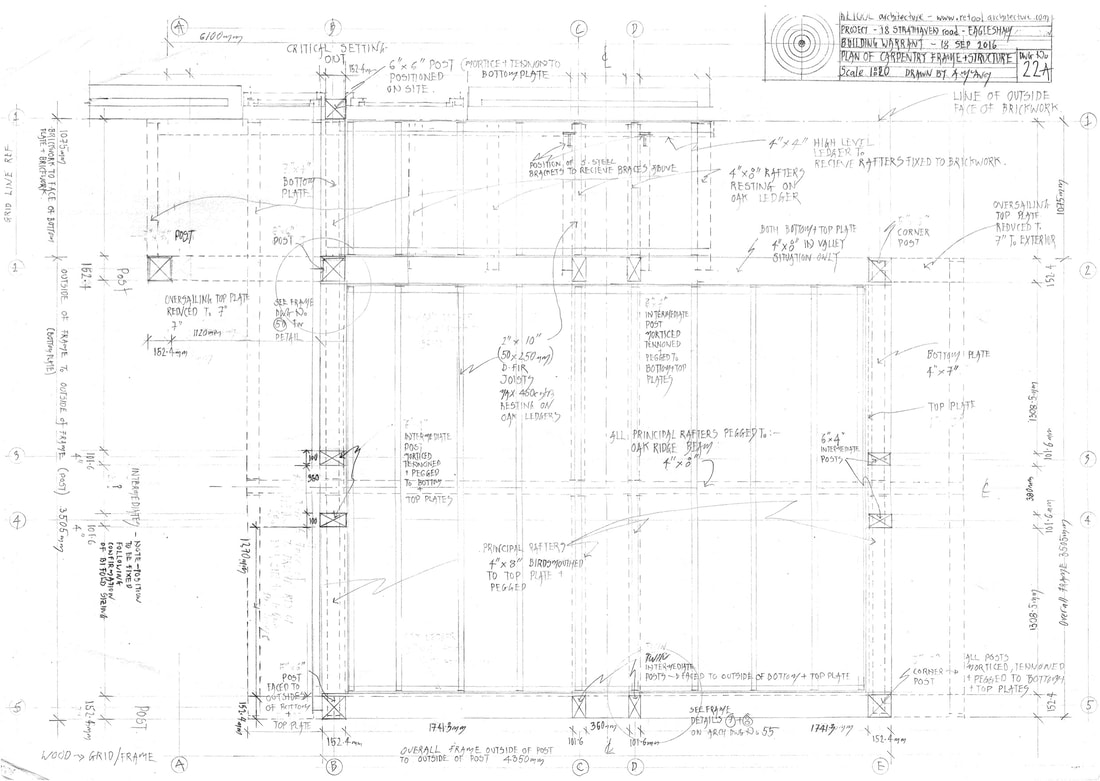 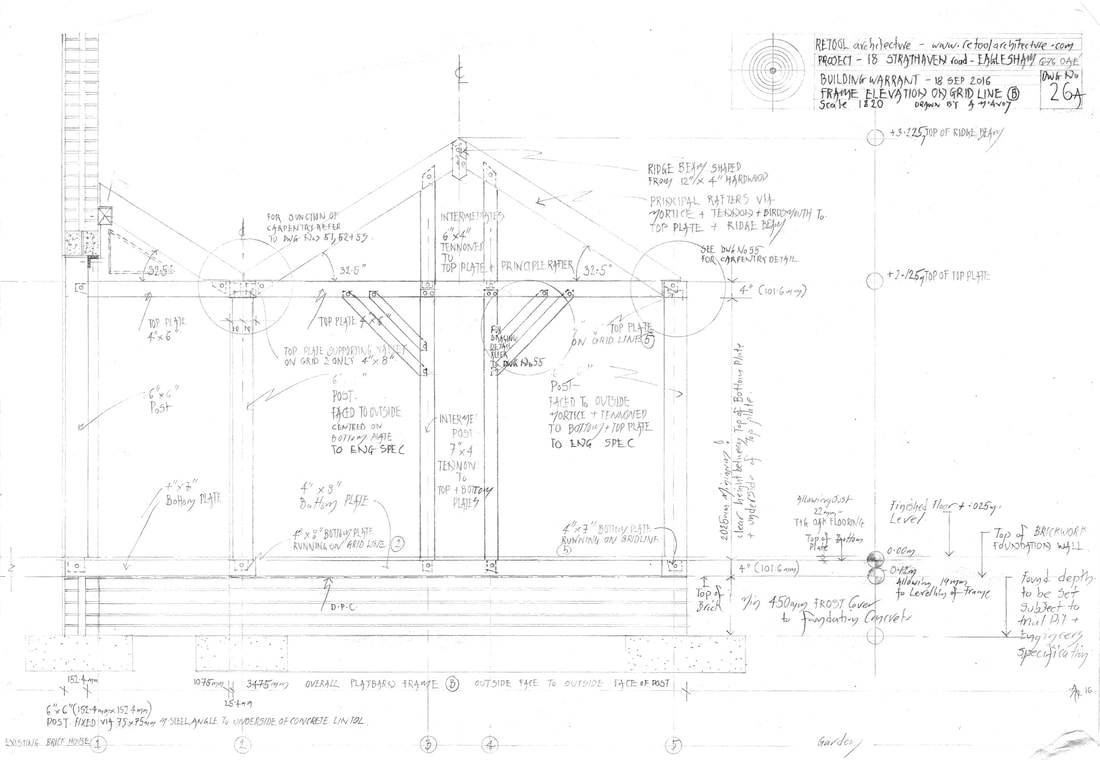 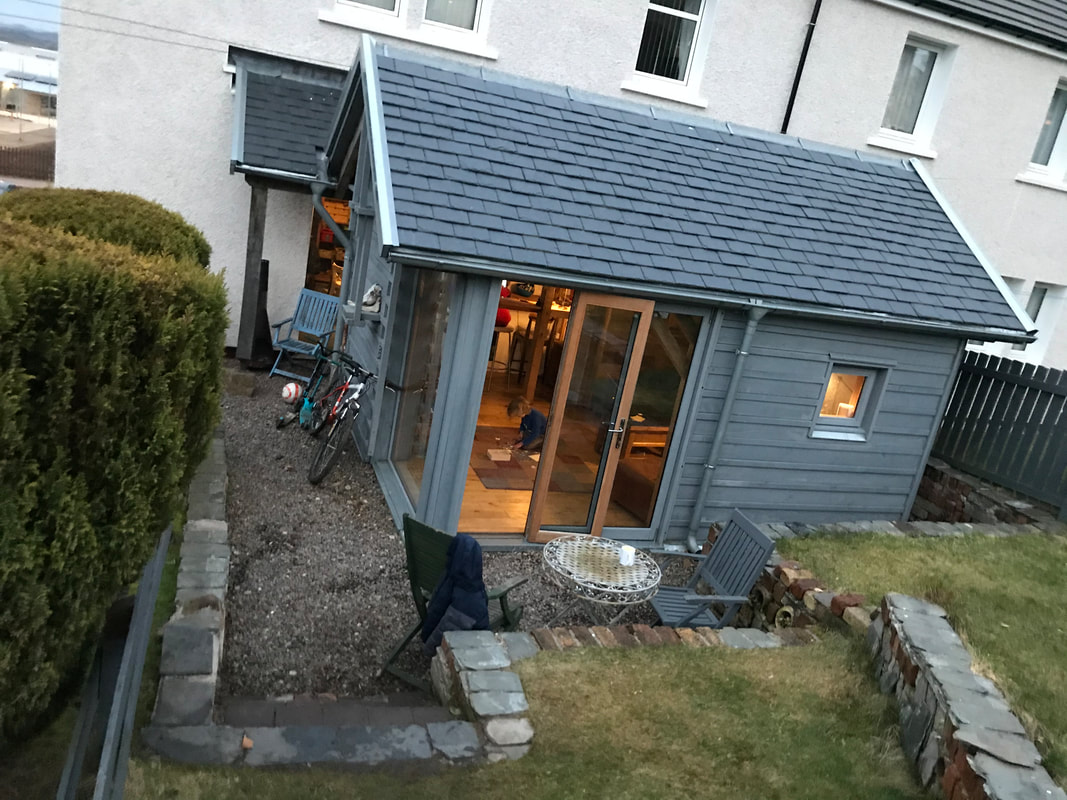 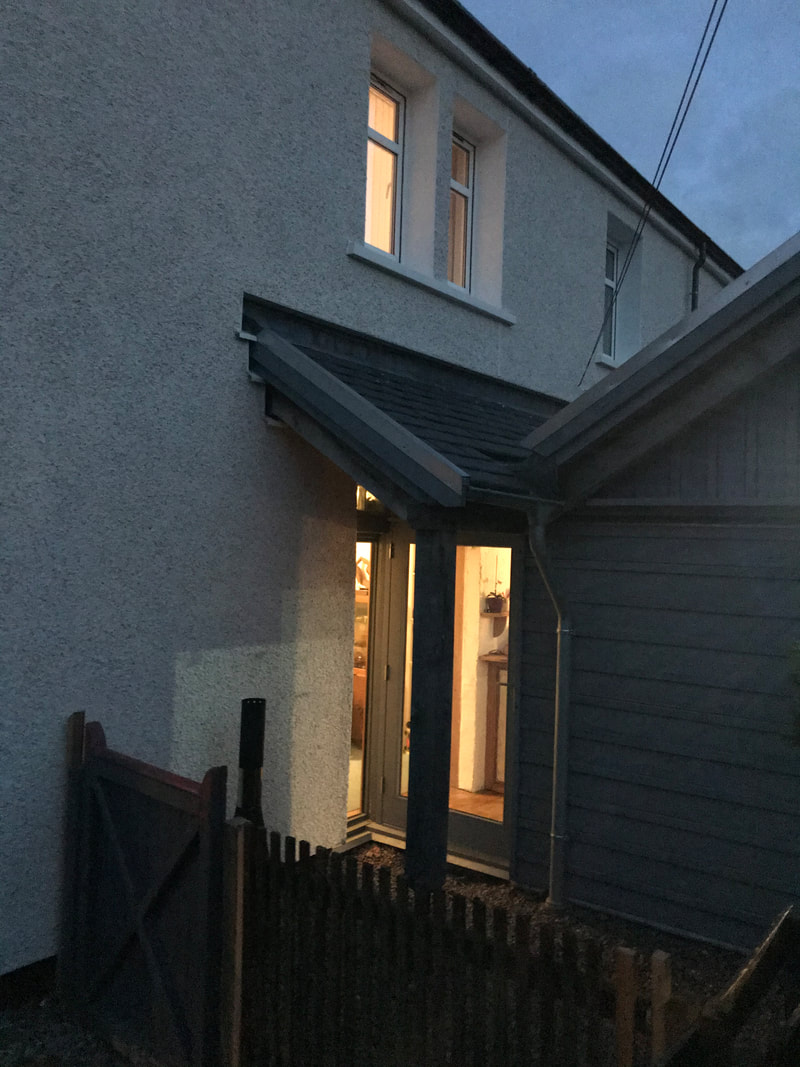 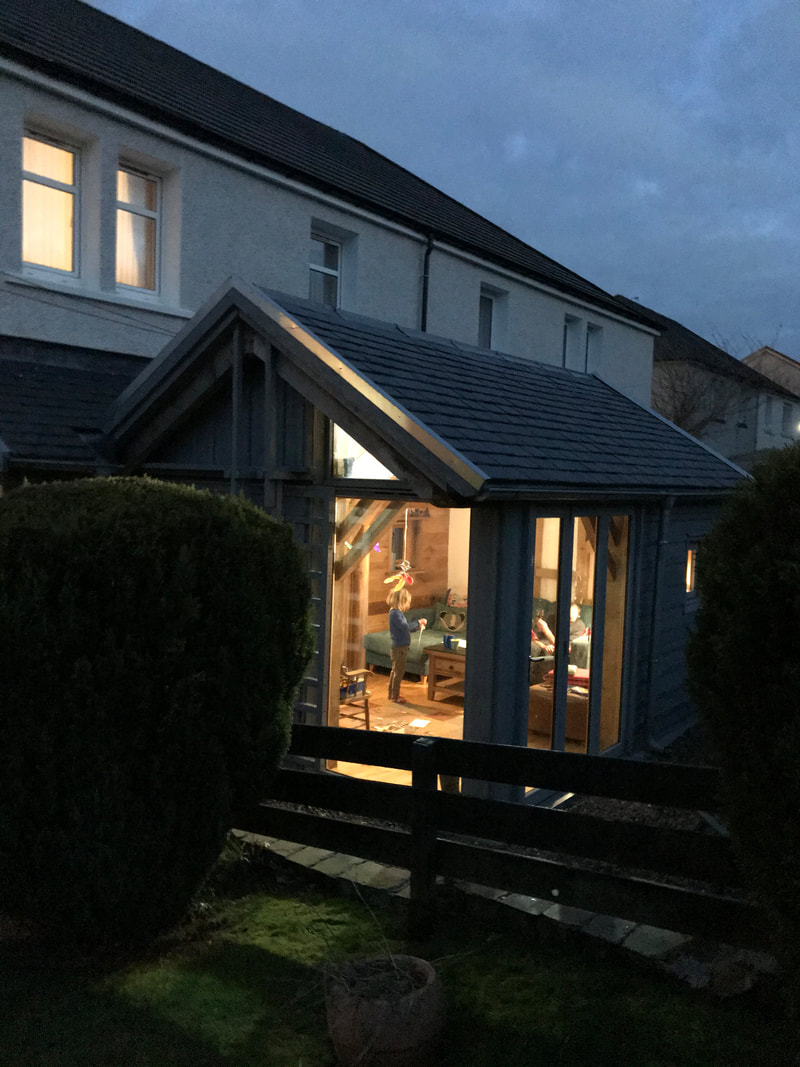 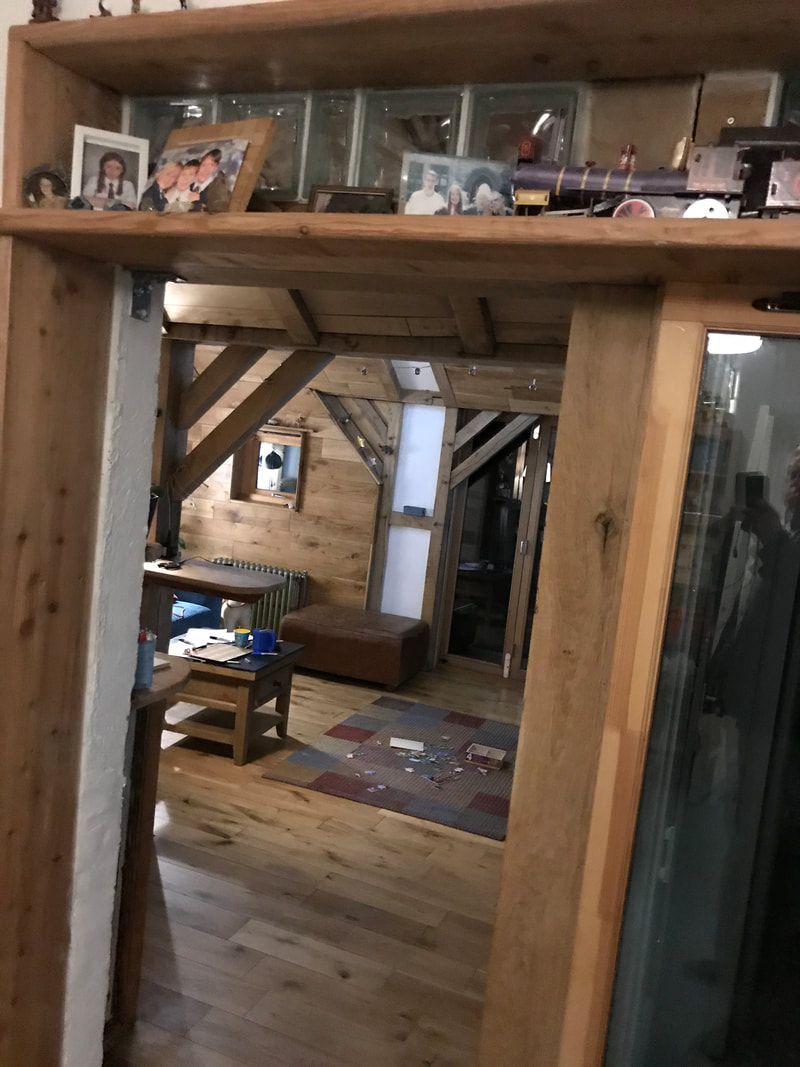 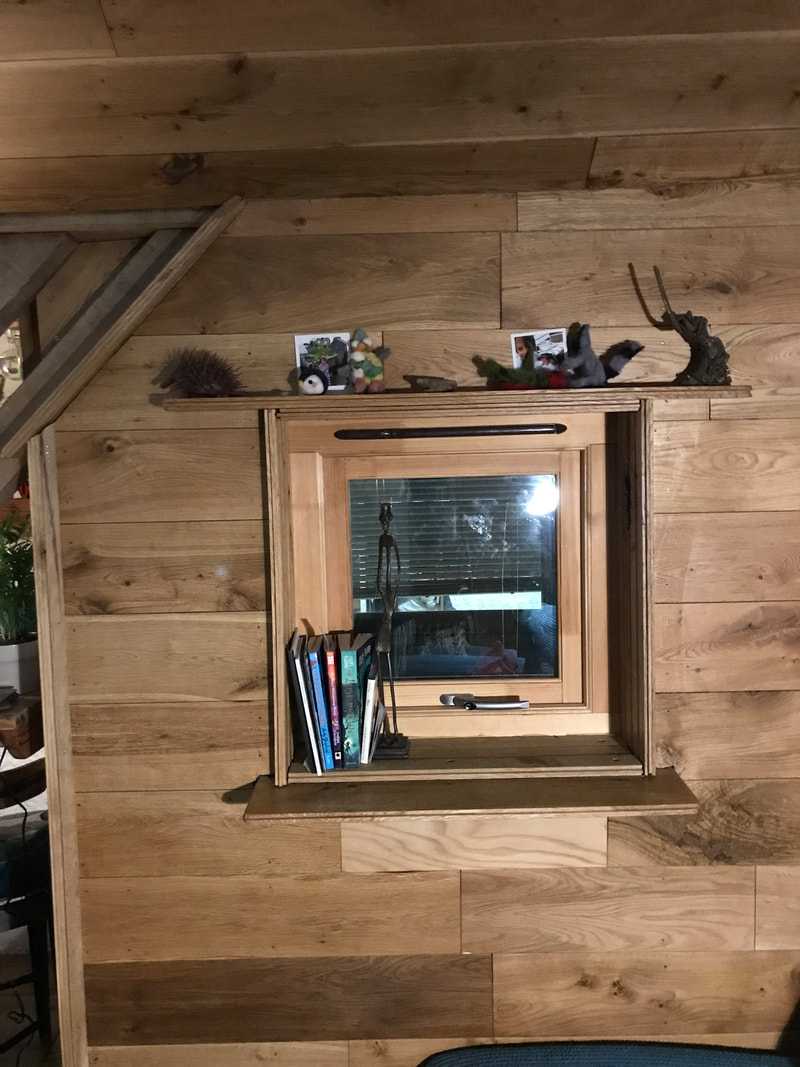 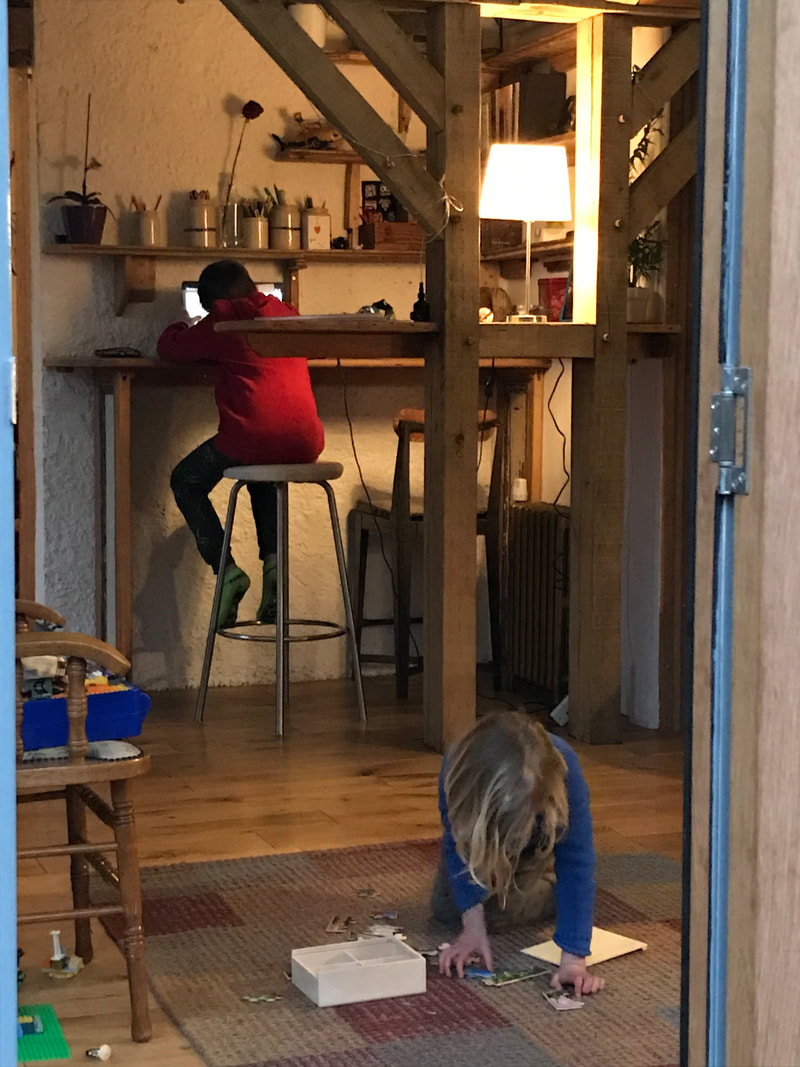 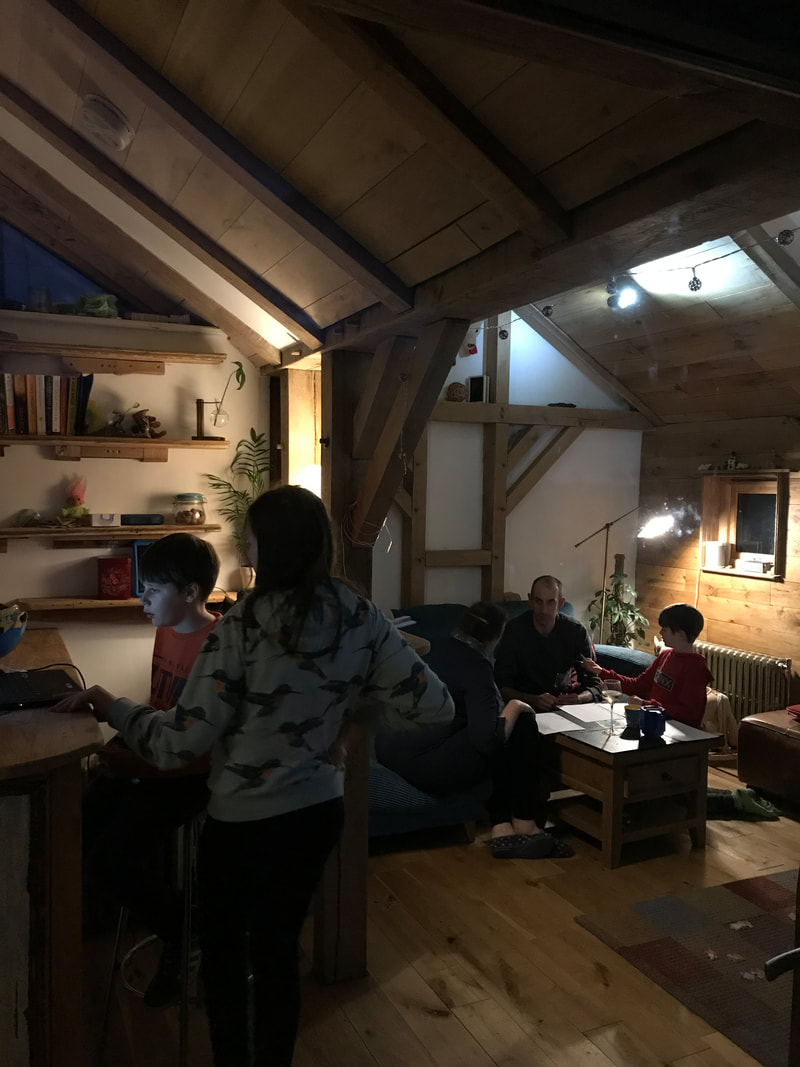 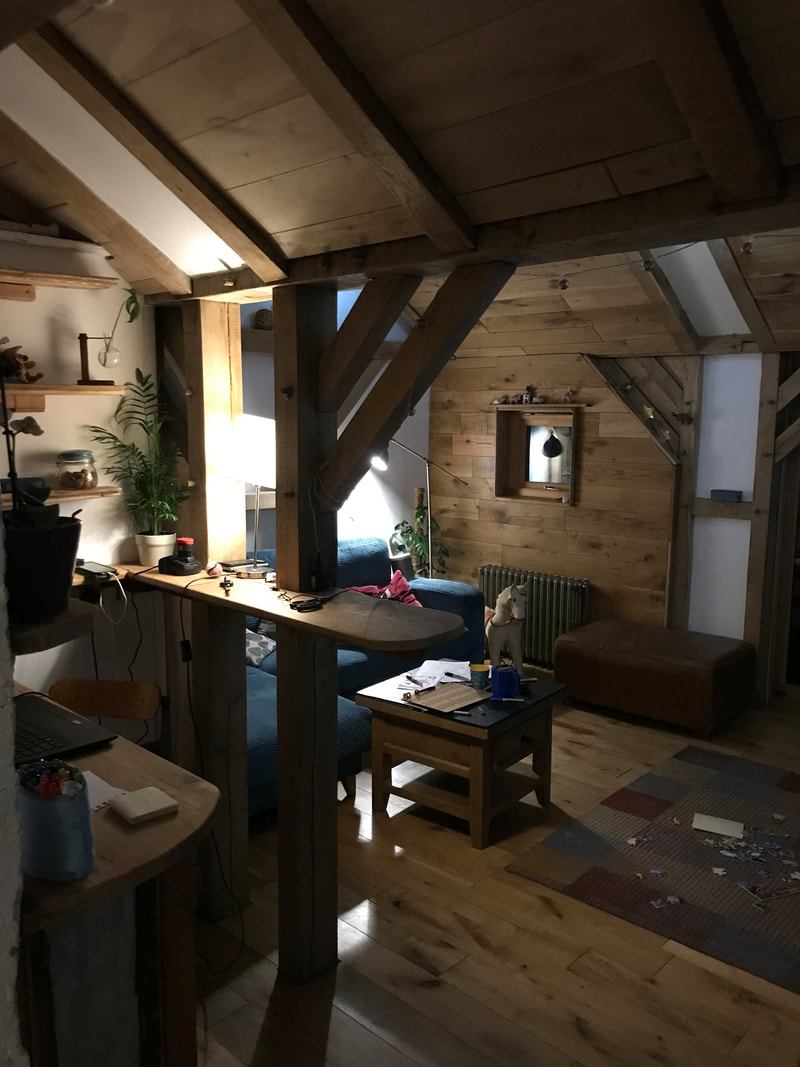 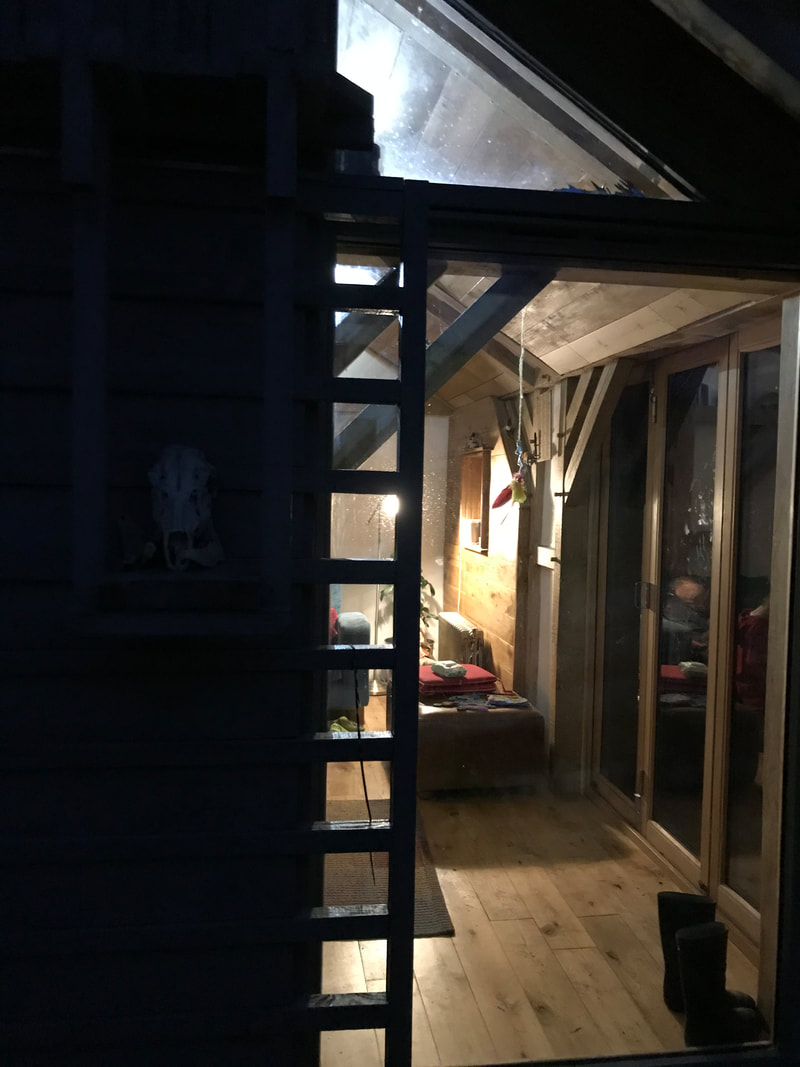 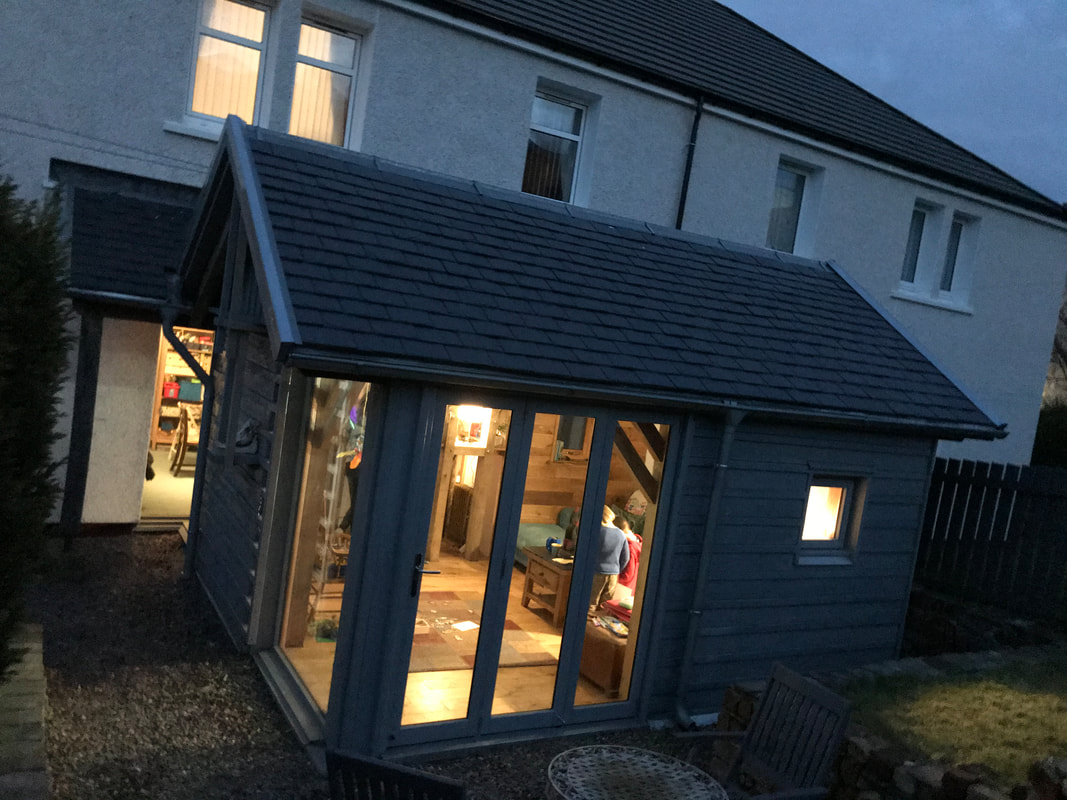 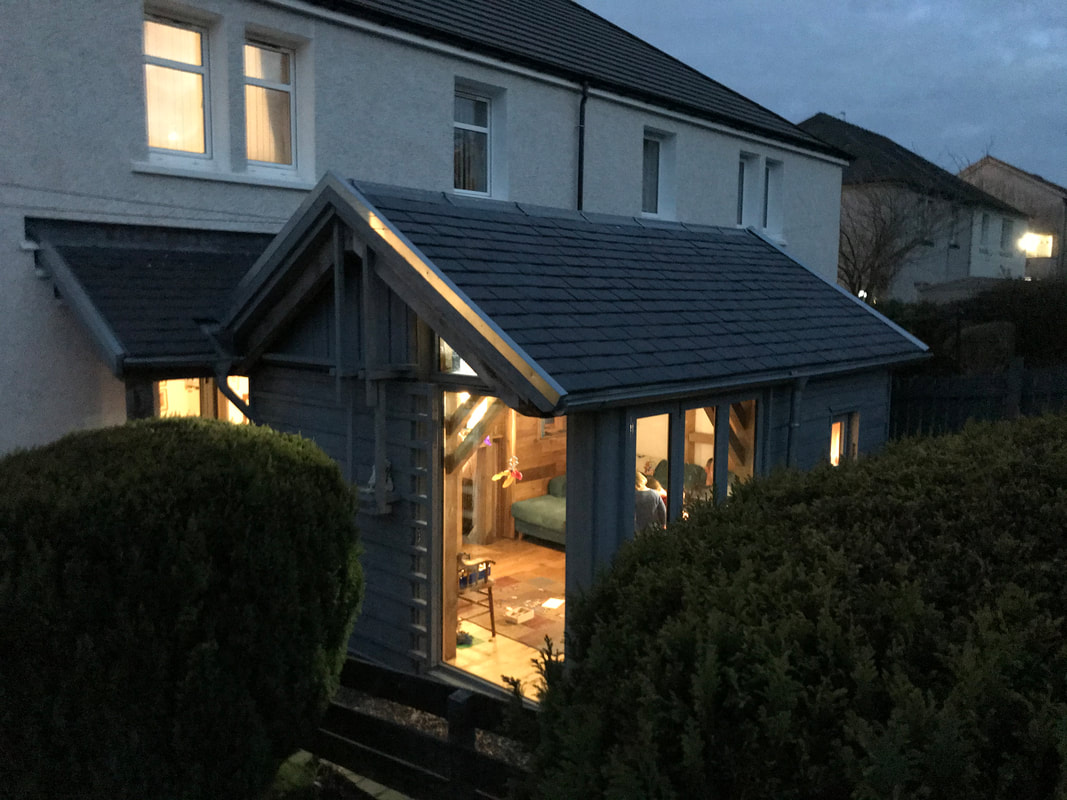 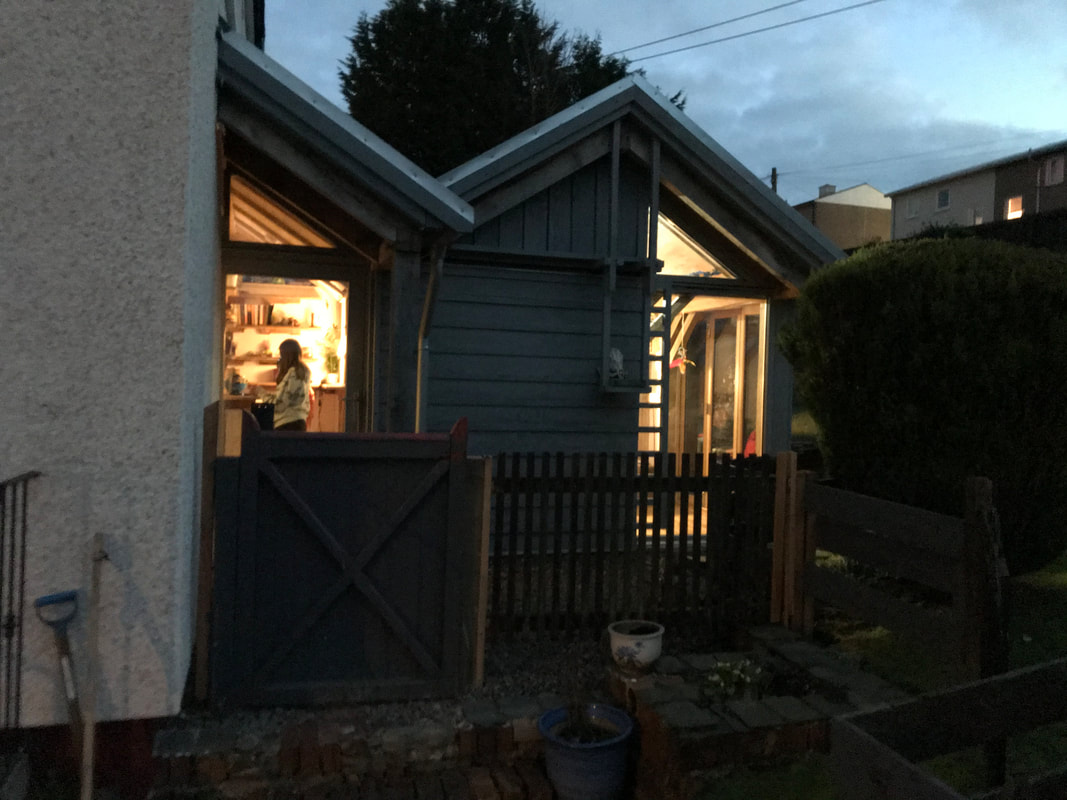